How to Tell If You Have a Weak Chin 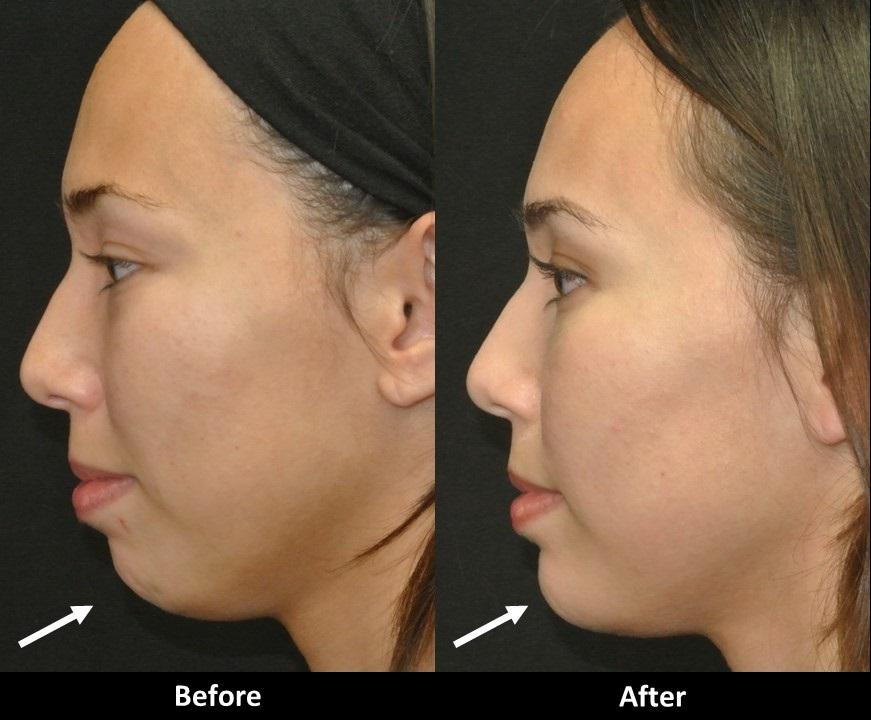 A weak chin is a common concern which makes the face look imbalanced. Fortunately, there are easy ways to identify and treat a weak chin.

What is a weak chin?

A weak chin, also called an under-projected chin or a receding chin, is a condition where the tip of the chin is not projected forward enough in relation to other parts of the face such as the forehead, nose, and lips. Sometimes a weak chin is also called a Bart Simpson chin because the characters in The Simpsons cartoons have minimal to no chins which make it look like the skin below the lips connects directly with the neck. This is seen best when looking at a person from the side (profile view). For example, in the patient shown in the before and after picture here you can see that in the before picture her chin is too far back, making the entire face look imbalanced. A weak chin can also make a large nose look exaggerated and correcting it can balance the appearance of the face. Correction of a weak chin provides a more masculine appearance in men and balances the face in women.  Correcting a weak chin can also improve your jawline definition. By moving the chin forward the skin along the jawline is tightened, making the jawline more apparent and decreasing the appearance of jowls that can make you look old.

How can I tell if I have a weak chin?

How can I treat a weak chin?

There are many ways to enhance a weak chin. Traditionally surgical treatments such as implants and more recently fat grafts have been used. In these treatments either a small implant or some fat (from somewhere else on you body) is placed on the chin under your skin. This helps to project the chin forward. Nowadays many people are steering away from surgery for a number of reasons such as the investment, risks associated with surgery, and recovery time. Also, more minimally invasive treatments are becoming available. For example, fillers such as Voluma can be used to enhance a weak chin. This has the same effects as surgery, but without the risks of anesthesia, without incisions or scars, and with minimal recovery time. The entire treatment takes only a few minutes. Your skin will be numbed with cream for about 15 minutes and Voluma is placed on the chin using a tiny needle. There is minimal pain, bleeding, or bruising. You’ll see swelling for one to two weeks. Dr. Alex recommends applying ice packs on the area, sleeping on an extra pillow, and avoiding salty foods to minimize swelling. The best thing about a Voluma treatment is that you’ll see your results right away and you’ll enjoy your results for one to two years. Dr. Alex recommends starting with a conservative amount of Voluma such as two syringes since you can always add more if you like. Voluma can also be dissolved, making it safe.